My name is Ruben Waterman and I’m the founder of Bittr. Today marks a black day in the history of my career as entrepreneur and bitcoiner. Things have turned bitter for Bittr. Due to upcoming regulatory changes in The Netherlands (where Bittr is based) I will have to shut down the Bittr service on April 28, 2020 09:59 UTC. A small chance exists I will have to shut down the service even before this moment if the new regulations get published in the “Government gazette” before this time. New sign-ups and the sell bitcoin page are already disabled.

A little background on AMLD5 and its implementation in The Netherlands

The moment the European Union introduced AMLD5 where it became clear cryptocurrencies would fall under the scope Anti-Money Laundering regulations, I was worried about having to ask every customer to upload a proof of identity as this goes against my values of treating every customer (even those that buy €25 worth of bitcoin) by default as a criminal until they prove otherwise. Moreover, every Bittr customer has already proven their identity to their bank. We would much rather have our customers trust a party for such sensitive documents they already trust with safekeeping their money anyways.

Initially the European AMLD5 was roughly translated into Dutch regulations with little to no modifications. However, after a public consultation by industry as well as DNB (the Dutch central bank), all kinds of regulations were added. This was heavily criticized by the bitcoin industry, experts and even the Council of State (the government body testing new laws) as the Dutch regulations would go much further than the EU directive prescribed. The Minister of Finance (Wopke Hoekstra) then changed some wording so as to comply with the Council of State’s request but not actually changed any of its content. The Senate has raised questions about this practice but nevertheless approved the new regulations.

Against my own will, I was prepared to implement the necessary changes in order to keep running Bittr (i.e. implementing a KYC module and increase the scrutiny of the already existing transaction monitoring system), as this would be the case for anyone operating a bitcoin exchange within the EU. What I was always worried about is all the documentation and compliance requirements the DNB managed to get into these new regulations as they are not designed for one-man companies (i.e. how does one write a policy on internal control, governance, independent compliance, internal procedures, internal / external reporting and auditing, whistle blow procedures, integrity risk analysis etc. as a one-man-show). Above all, Bittr would have to appoint a dedicated compliance officer who’s responsible for compliance with the new regulations. Who can I appoint? Myself? That probably doesn’t work also being the sole shareholder and director. Or I should hire somebody as my (part-time) compliance officer? Well, Bittr isn't big enough for that yet and because of these regulations I can't grow anymore to the required size becuase of these regulations. To me, this sounds like they’re treating every bitcoin company in The Netherlands as a bank and a startup like Bittr does not fit into this regulatory scheme in my opinion.

So, where did this go wrong for Bittr and why do I have to shut down the service all of a sudden?

I was aware of these upcoming changes since November 2019 and have since been exploring multiple options what I should do with Bittr. I was also under the impression that as soon as the law would become effective, existing market participants would have six months to complete their registration. How wrong I was! It turns out the transitioning period only applies for those companies who have submitted a complete registration request before the new regulations officially start (probably within 5-10 working days). And DNB is the one who has six months to then evaluate my “registration”. Additionally, as soon as the regulations “are live”, Bittr would have to do a full KYC procedure on every existing and new customer.

However, I don’t foresee it to be feasible to prepare all the documentation for DNB that has little chance of success anyways as it is unlikely, they will find a one-man show company with adequate checks and balances without having an “independent” compliance officer.

I could file a registration regardless of its potential success (and pay €5000 to DNB) and launch our KYC module (pay the supplier €7750) to continue the service for another six months (perhaps, as DNB has the right to reject my registration during this six month period) or hire a qualified lawyer in this space (€315/hour) to maybe obtain a license. I should call it a registration but perhaps Wopke Hoekstra, DNB, The House of Representatives and the Senate should execute a “kind of Howey test” on this “registration” / “license” wordplay: If it looks like a duck, swims like a duck, and quacks like a duck, then it probably is a duck.

However, in that case I would still make Bittr become part of the financial surveillance system to make each and every one go through this KYC procedure and most likely still have to shut down within the next six months, which is why I prefer to not bother you with this process.

The Bittr service is still running as of today and you may dump as much fiat money (BRR, BRRR, BRRRR, BRRRRR) as you want but we may have to shut down our service before your money arrives to our bank account. After April 28, 2020 09:59 UTC (or sooner if the law is published in the “Government gazette”) Bittr will not be able to provide any services anymore. As of this moment, we will cancel our bank account and all bank transfers will automatically bounce back to your bank account. This may take some time before you’ll get your money, so we recommend you cancel any standing orders you have running to Bittr so that the money never even leaves your bank account. Also, be aware that as we will have terminated the bank account, we will not be receiving your funds and cannot send it back to you any faster than the automatic bouncing of a transaction.

Of course, I still want each and every one of you to stack sats although it will probably not be as hassle free as Bittr is. If you can, do not use KYC exchanges! Take a look at HodlHodl and Bisq. If you must use a KYC exchange, do not use Coinbase! Look for bitcoin-only alternatives in your country. In The Netherlands I gladly recommend bitonic! Nice guys, great company, very involved in the Dutch bitcoin community and most importantly, no shitcoins!

One more thing about DNB, isn’t it ironic they are the first European Central Bank to publicly come out with a plan for a Central Bank Digital Currency (CBDC) because “The regulator wants to prevent crypto coins such as Facebook's Libra or bitcoin from becoming too popular” (De Telegraaf, April 21, 2020, (mirror)) and at the same time make it (nearly) impossible for innovative small bitcoin companies (improving bitcoin’s popularity!) to operate. Smells fishy to me…

The past three years have been amazing to me! I’ve gotten to know a lot of you in the bitcoin community much better at the tons of conferences I’ve attended, and it really is this community that makes bitcoin awesome! Building a startup like Bittr was extremely satisfying, especially seeing so much demand for such a simple idea all throughout Europe!

I’d like to thank my partners; Bunq (the only cool bank in The Netherlands that was willing to work with me), Kraken (the best exchange available for the Euro markets with amazing dedicated support, thanks Julian!), my developers at Around25 (they’re the best!) and Bitko Yinowsky (for your awesome designs) but most of all:

Oh, and remember while DNB has won from Bittr, bitcoin will only come out stronger!

P.S. Do you have any questions or want to leave any remarks, find me on Twitter or email me 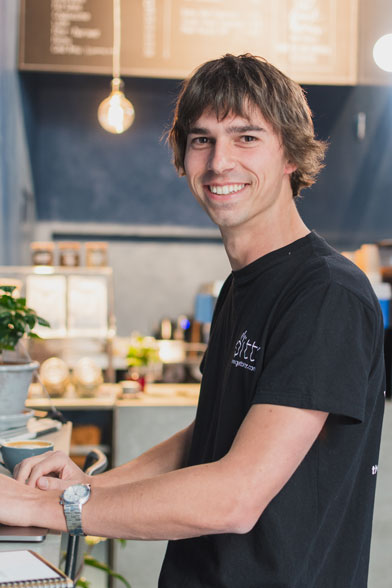 Founded in April of 2018, Bittr is a bitcoin savings platform through which European consumers can safely buy bitcoin on a recurring basis, straight into their own bitcoin wallet. We're based in The Netherlands.

Bitcoin is the first ever digital scarce asset, enabling people to send and receive money across the internet, secured by a decentralized peer-to-peer network.